Ambassador of the International Medical Forum

Ambassador of the International Medical Forum 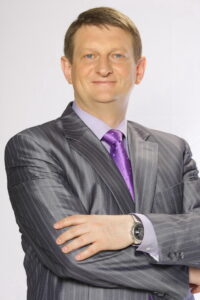 Ambassador of the International Medical Forum, member of the organizing committee of the National Medical Award, he has a state specialization and the highest category in healthcare management, obstetrics and gynaecology.

Executive Secretary of the Kiev Medical Council, member of the Public Council of the State Service for Medicinal Products, Medical Devices and Drug Control, Master of Business Administration, Secretary of the Supervisory Board of the National Medical Academy of Postgraduate Education named after P.
L. Shupik, National Museum of Medicine of Ukraine, member of the editorial board of the magazine “Medical practice”, member of the American Association of Historians of Medicine, Association of Obstetricians and Gynaecologists of Ukraine. Organizer and manager of the national projects “Healthy Heart”, “Healthy Vision”, “Femininity of the Future”.

Co-Chairman of International Congresses on Medical Law and Bioethics. Senior Lecturer at the Military Medical Academy. Doctor obstetrician-gynaecologist in MC “Bio Plus”. Member of the Board of the Ministry of Health, Advisor to the Deputy Prime Minister for Humanitarian Issues (2014).

Member of the working groups on the formation of ethical codes for doctors and pharmacists, management and reforming of health care, medical insurance and health financing systems in Ukraine.

Born on 29 July 1967. He graduated from a specialized physics and mathematics school in Rivne with a gold medal. Graduated with merit from 1 medical faculty of the Kiev Medical Institute.

He led the student scientific society named after Acad. Kissel of the first medical faculty. He was a scholarship holder of the award named after Acad. Yanovsky and Acad. Strazhesko. He graduated with merit from the medical residency of the Institute of Paediatrics, Obstetrics and Gynaecology of the National Academy of Medical Sciences of Ukraine, scientific and practical work was related to the creation of a treatment system and immunological correction of miscarriage.

In 2003, he graduated with merit from the National Economic University and defended his master’s thesis on “Strategic Marketing Planning in Health Care”. Master of Business Administration. Goethe Institute (Kyiv-Munich). He has a state specialization in health care management. He has the highest category in obstetrics and gynaecology, organization and management of health care. He participated in the creation and management of the National Programme “Healthy Lungs of Ukraine”, in the creation of a network of free diagnostic centres “Pulmis” and the first international Ukrainian-German medical diagnostic centre for the diagnosis and treatment of gastroenterological pathology “BYK-Kyiv”, which examined tens of thousands paediatric and adult patients. Member of various professional medical associations. With his participation, national schools of pulmonologists, neonatologists, obstetrician-gynaecologists and endocrinologists were established.

He became the first citizen of Ukraine officially registered through the General Directorate for Serving Foreign Representative Offices in the department of pharmaceutical enterprises.

He implemented state programmes for the provision of medicines of Ukraine on international loans.

With the participation of I.N. Soroka more than 10 national regulatory documents in the field of health care system reform aimed at implementing state health care programmes have been developed and approved. Ivan Soroka is actively working in working groups for establishing a formulary system, ethical and marketing codes, national lists of vital medicines and medical devices, preparation for implementation of the insurance medicine system in practice, and adequate funding for the medical industry.

He teaches at the school of medical managers, is the author of a course of lectures on the financial and economic aspects of health care, time management, the author of numerous publications in national and foreign magazines, rationalization proposals, methodological recommendations, and information letters.

Raising the prestige of the Ukrainian doctor and medicine to the proper level, he constantly participates as an expert in journalistic programmes on television, radio and in the press.

He is a member of the Organizing Committee of the National Medical Award – the highest industry award that brings together dozens of professional medicinal and public organizations in the desire to strengthen the health of the Ukrainian people and develop the health care system of Ukraine (Chairman of the Organizing Committee of the NMA from 2009 to 2013), the President of the Ukrainian Medical Club, he was an adviser to ministers of health, conducts pedagogical activity at the Military Medical Academy. Since 2014, full-time adviser to the Vice Prime Minister for Humanitarian Issues.

During his professional career, Ivan Nikolaevich Soroka showed high professional and personal qualities as a leader and organizer of health care. He is a leader in medical self-government of Ukraine and a practising physician, one of the leading experts in the reforming and functioning of the health care system, e-health, medical and pharmaceutical management, management consulting, financial consulting, and medical history, well-known in national and international circles. He enjoys well-deserved authority and respect among colleagues, doctors, pharmacists, listeners, and the public.